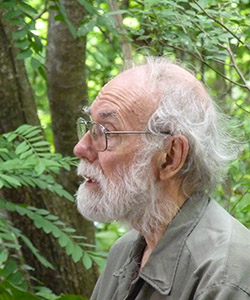 Dan Janzen is an evolutionary ecologist, naturalist, and biodiversity conservationist, and Dimaura Professor of Conservation Biology at the University of Pennsylvania, USA. For 57 years he has spent much of his time doing field research in Costa Rica and since 1985 he and his wife Winnie Hallwachs have been among the founders and Technical Advisors to Area de Conservación Guanacaste (ACG). ACG, 2% of Costa Rica and the size of New York City and all its suburbs, is the oldest, largest and most successful tropical ecosystem restoration project in the world, located just south of the Costa Rica-Nicaragua border and containing hundreds of thousands of species, all managed and strategized by resident Costa Ricans.

This ongoing inspiration was only possible with the full-scale enthusiastic use of ACG biodiversity as “laboratory rat” by Paul Hebert and hundreds of team members in developing the ongoing Biodiversity Institute of Ontario’s Centre for Biodiversity Genomics and its BOLD information management and analysis site for this massive biodiversity exploration.