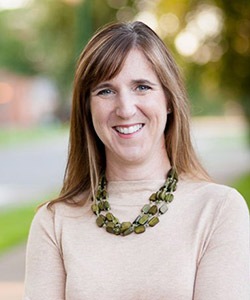 Institute on the Environment
University of Minnesota
United States of America

Jessica Hellmann is the director of the Institute on the Environment at the University of Minnesota. As director, she provides overall strategic leadership for the Institute, an internationally recognized organization working to solve grand environmental challenges, while promoting interdisciplinary research, teaching and leadership across the university and engaging external partners and stakeholders. She is also the Russell M. and Elizabeth M. Bennett Chair in Excellence in the Department of Ecology, Evolution and Behavior in the College of Biological Sciences.

In her research, Hellmann studies the ecological effects of climate change and strategies for adapting to climate change. Her work has shown that populations respond from one another to climate change, undermining a key assumption in models that prediction where species will live in the future. Using common garden experiments, she has revealed the number and kind of genes involved in local adaptation of butterfly species to climate. Hellmann and co-authors also wrote one of the first scientific papers on managed relocation/assisted migration, lead the first international working group on this topic, and has written several articles that assess the pros and cons of this adaptation strategy.

Hellmann regularly counsels state and national governments on habitat management, restoration and endangered species conservation. In addition, building upon her findings in ecology, Hellmann has extended her work on climate change adaptation to human systems, including health, infrastructure, food and water. She works with governments and corporations to build investment in climate change adaptation and co-authored several climate assessment and adaptation planning efforts, including the biodiversity and ecosystem portions of the Chicago Climate Action Plan and the 2014 US National Climate Assessment.

Institute on the Environment Profile
Publications